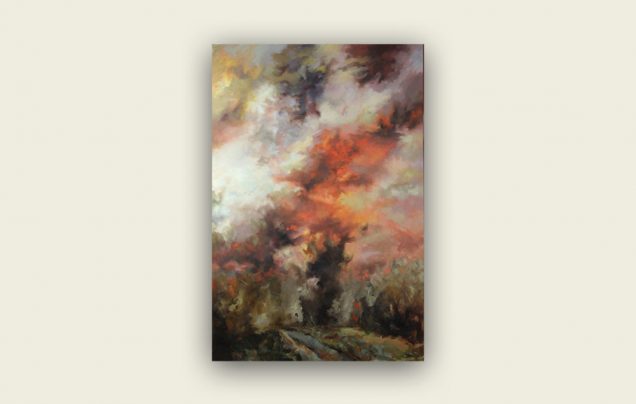 The winner of the 2020 Glover Prize People’s Choice Award was awarded to NSW artist Veronica O’Leary, taking out the popular vote for her entry: ‘Our land is burning – Tasmanian fires 2019’ (above).

“This painting is a response to surviving the fires first in Tathra 2018 where I work in my garden/ bush studio and then in Dec 2019 when we once again evacuated. Working on King Island Tasmania I was made acutely aware of the fires in Tasmania. I have worked on this painting to suggest the fierce intensity and devouring strength of those unprecedented fires which have destroyed precious habitat in Tasmania as well as huge tracts of land and homes in Australia, Tasmania and Kangaroo Island. The unrelenting ferocity of these fires called for a bold hot palette and a surging energy in paint application to convey fear, powerlessness and vulnerability in the face of a force unleashed on a world in which we have ignored the implications of climate change. The scale of the work is large in an attempt to overwhelm the viewer into that moment of utter helpless abandonment to the unstoppable fire force.”

The Children’s Choice Award was presented to Laura Patterson, for her entry ‘2020 Pteridomania’. Laura’s entry was also Highly Commended by the judges.

Queensland-based artist, Patterson, who was previously a Glover Prize finalist in 2017, describes her artwork:

“Russell Falls Tasmania. Painted during January 2020 while fire ripped through the country. As whole ecosystems burn, will the landscapes we once previously enjoyed so freely become rare and unusual? Could the pockets of remaining natural splendour take on a coveted and prized status? Would these pristine specimens of our fertile past become walled in and caged off, protected from disease and pests for posterity? The possible elevation of select elements of the natural environment presents an intriguing mirroring of the fern craze (Pteridomania) of the Victorian era. With their purpose designed grottos, cathedral like glasshouses and intricate portable Wardian Case’s the Victorians successfully transposed what was once a simple and quietly beautiful fern into something that was protected, cultivated and elevated to cult like status. The direction of this painting changed in light of the overwhelming sadness and horror felt during the bushfires. Here, a shining example of 2020 Pteridomania, these primeval ferns sit quietly in their natural landscape, enshrined in a modern day Wardian Case, with the hopes that this jewel of natural splendour does not become overtly coveted in the future simply because it became so rare.”