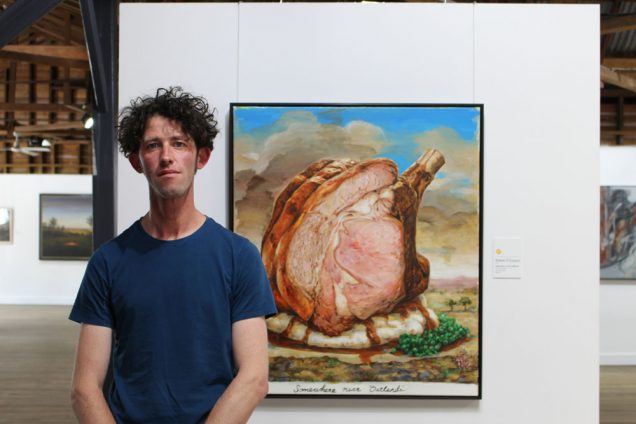 Hobart-based artist, Robert O’Connor has been announced as the winner of the 2020 Glover Prize for his entry entitled ‘Somewhere on the midlands’. Having completed a Bachelor of Fine Art with Honours at the University of Tasmania in 2007, O’Connor has displayed work at numerous solo and group exhibitions across Australia, as well as in China, the USA, and Chile, since 2008. This is the fourth time that Robert O’Connor has been selected as a Glover Prize finalist, with his artworks being on display in 2014, 2017, and again in 2018 (see: https://www.johnglover.com.au/artists/robert-oconnor).

O’Connor’s paintings are known to question ideas of authorship and originality in art with direct references to image reproduction.

O’Connor says of his work: “Armed with the postmodern trends of appropriation, pastiche and ironic estrangement, the works question ideas of originality and authorship while remaining engaged with painting traditions. Much as a magpie collects shinny things or a catfish eats shit, I collect images. Well, perhaps I don’t collect them as much as they are thrown at me, along with opinions, every day and mostly unsolicited. What I do is organise images in a way that I think makes sense, which in reality results in a mess of borrowed imagery that makes no immediate sense whatsoever.”

Speaking about his winning entry, O’Connor explores European settlement in Tasmania, with his statement on the piece reading: “Things were going pretty good. Then Europeans arrive, erect fences and place foreign livestock on the land, now we’re cooked. I can hardly see the landscape with all of this stuff in the way.”

O’Connor has won $50,000 and a bronze maquette of colonial artist, John Glover, after whom the Glover Prize is named.

Speaking about the winning artwork, the 2020 Glover Prize Judges stated that:

“We had heard Robert O’Connor described as a – ‘Cartographer, archaeologist, explorer, scavenger, and sociologist’, and would agree that he is all those things, as well as a skilled painter. O’Connor’s painting – Somewhere on the midlands – is at first a humorous and poetic look at our colonial past and the impact that had on the pre-European landscape, as well as a deliberate prod to issues such as deforestation and revegetation. There are great absurdist qualities in Robert’s winning painting, harking back to a wonderful period of 20th century art which included the surrealist movement. A period when social and political issues of the time were addressed by artist though the use of witty humour and wry commentary, while never letting go of their deep sense of social responsibility. Here Robert has placed a handsome rack of lamb with mash and peas, (and let’s not forget the gravy) and made it centre stage of a landscape painting of an area fondly know as ‘the midlands’. O’Connor has made what can only be described as an ironical bucolic landscape imbued with a darkly comical commentary on the impact of European settlement on this landscape. It is not a didactic moralising painting pointing at people, rather an image of an important topical discussion being had all over the country.

The judges also awarded two finalist pieces with Highly Commended Awards – Ileigh Hellier for her entry ‘Without the other’, and Laura Patterson, for her entry ‘2020 Pteridomania’.

Ileigh Hellier describes the rationale behind her piece as follows by stating that “landscape on a train, bicycle, car or boat. Trees, hills and rivers flicker past as if they were in a flip book. There are many individual scenes that you remember but each of them aren’t much without the other.” Hellier is based in NSW, and this is the first time that she has been selected as a Glover Prize finalist.

The Judges said of the piece:

“Ileight Hellier’s work is a disarmingly direct account of how most of us experience the landscape. It was Fred Williams who taught us to see the Australian landscape as passers-through; rapidly registering its intense light, warm tonalities and scrabbly gums. Hellier is as clearly drawn to the fleeting glimpses seen from a car, train or bicycle, and ‘Without the other’ is an honest and unaffected response to scenes that simply caught and lodged in her imagination. In the tradition of Colin McCahon, whose ‘Northland panels’ and ‘Six days in Nelson and Canterbury’ are painted from fragmentary recollections of train and bicycle journeys, Hellier composes a grouping of thirty-six rapid-fire but intimately related impressions. These are avowedly not over-thought paeans of praise to a singular moment. Rather, they are small, humble gestures toward the many accumulative moments that can, taken together, constitue our lived experience of the landscape.”

Queensland-based artist, Patterson, who was previously a Glover Prize finalist in 2017, describes her Highly Commended Artwork:

“Russell Falls Tasmania. Painted during January 2020 while fire ripped through the country. As whole ecosystems burn, will the landscapes we once previously enjoyed so freely become rare and unusual? Could the pockets of remaining natural splendour take on a coveted and prized status? Would these pristine specimens of our fertile past become walled in and caged off, protected from disease and pests for posterity? The possible elevation of select elements of the natural environment presents an intriguing mirroring of the fern craze (Pteridomania) of the Victorian era. With their purpose designed grottos, cathedral like glasshouses and intricate portable Wardian Case’s the Victorians successfully transposed what was once a simple and quietly beautiful fern into something that was protected, cultivated and elevated to cult like status. The direction of this painting changed in light of the overwhelming sadness and horror felt during the bushfires. Here, a shining example of 2020 Pteridomania, these primeval ferns sit quietly in their natural landscape, enshrined in a modern day Wardian Case, with the hopes that this jewel of natural splendour does not become overtly coveted in the future simply because it became so rare.”

Judges stated that Patterson’s ‘2020 Pteridomania’ “needs to be seen in the flesh to understand its delicate detail”. They continue:

“As viewing it is not a passive experience, your eyes need to adjust to the darker areas of the work that slowly reveal its depth and incredible detail. Laura Patterson’s painting is a contemporary rendering of conventional landscape painting and her reflection on Pteridomania (the fern craze of the Victorian era where select elements of the natural environment are framed, protected and elevated to cult like status). It reminded us of a recent moment during the fires in NSW, where a secret operation by specialist firefighters saved the world’s last stand of Wollemi Pines. With flames approaching the area , air tankers dropped fire retardant in a protective ring around the trees. Through her use of an elaborate frame Laura’s work poetically convey a collective anxiety around our changing landscape.”

Two more prizes are to be awarded as part of the 2020 Glover Prize with the People’s Choice and Children’s Choice Awards being drawn on the final day of the exhibition (Sunday 15th of March). The winners of these popular votes will receive $3,000 and $500 prize money, respectively.

Established in 2004, The Glover Prize is Australia’s most prestigious landscape art prize™. It is awarded for the work judged the best contemporary landscape painting of Tasmania completed in the previous 12 months. The winner receives $50,000 and a bronze maquette of colonial artist John Glover, whose legacy is celebrated though the prize. Landscape painting is defined in its broadest sense. The aim is to stimulate conversations about the meaning and possibilities expressed in the words landscape, painting, and Tasmania. The Glover Prize is open to artists from anywhere in the world. The exhibition commences on the March long-weekend, running from Saturday the 9th of March, 2019 and continuing until the end of the following weekend on Sunday the 17th of March, 2019, at the historic Falls Park Pavilion in Evandale.